A collaboration of scientists from the Shemyakin-Ovchinnikov Institute of Bioorganic Chemistry, the Moscow Institute of Physics and Technology and Prokhorov General Physics Institute of the Russian Academy of Sciences have developed a breakthrough technology to resolve a key problem that has prevented the introduction of novel drugs into clinical practice for decades. The study was published in Nature Biomedical Engineering and featured in the journal’s News & Views section.

The development of medical chemistry since the late 19th century has led to the transition from traditional medicine to drugs with strictly defined chemical formulas. Despite being some 150 years old, this paradigm still underlies the absolute majority of modern medications. Their active molecules tend to perform one simple function: activate or deactivate a certain receptor.

However, since the 1970s many laboratories have been pursuing next-generation drugs that would implement multiple complex actions simultaneously. For example, identify cancer cells via a range of biochemical cues, signal the tumor location to the physician, and subsequently destroy all the malignant cells via toxins and heating.

Since one molecule cannot perform all of these functions, a larger supramolecular structure, or a nanoparticle, has to be used.

However, despite the enormous variety of nanomaterials developed to date, only the simplest ones with highly specific functions have made it into clinical practice. The main problem in using therapeutic nanoparticles has to do with the amazing efficiency of our immune system. Over millennia, evolution has perfected the human body’s ability to eliminate nanosized foreign entities, from viruses to smoke particles.

When administered in reasonable doses, most artificial nanoparticles are cleared from the bloodstream by the immune system in mere minutes or even seconds. That means no matter how sophisticated the drugs are, the majority of the dose will not even have a chance to come in contact with the target, but will affect healthy tissues, usually in a toxic way.

In their recent paper, a team of Russian researchers led by Maxim Nikitin, who heads the Nanobiotechnology Lab at MIPT, proposed a groundbreaking universal technology that significantly prolongs the blood circulation and enhances the therapeutic efficiency of diverse nanoagents, without necessitating their modification.

The technology exploits the fact that the immune system continually eliminates the old, “expired” red blood cells — about 1% per day in humans — from the bloodstream. “We hypothesized that if we slightly intensified this natural process, we could trick the immune system. While it becomes busy clearing red blood cells, less attention is given to the clearance of the therapeutic nanoparticles. Importantly, we wanted to distract the immune system in the most gentle way, ideally via the body’s innate mechanisms rather than by artificial substances,” Maxim Nikitin said.

The team found an elegant solution, which involved injecting mice with red blood cell-specific antibodies. These are molecules forming the basis of the mammal immune system. They recognize the entities that need to be removed from the body, in this case RBCs. The hypothesis proved right, and a small dose of antibodies — 1.25 milligrams per kilogram of body weight — turned out to be very effective, extending the blood circulation of nanoparticles dozens of times. The tradeoff was very moderate, with the mice exhibiting a mere 5% drop in RBC levels, which is twice less than what qualifies as anemia.

The researchers found that their approach, called the “cytoblockade” of the mononuclear phagocyte system, was universally applicable to all nanoparticles. It prolonged the circulation times for tiny quantum dots measuring just 8 nanometers, medium-scale 100-nanometer particles, and large micron-sized ones, as well as the most advanced nanoagents approved for use on humans: the polymer-coated “stealth” liposomes, which disguise themselves under a highly inert polyethylene glycol coating to hide from the immune system. At the same time, the cytoblockade does not impair the body’s ability to fend off bacteria (natural microparticles) in the bloodstream, both in small doses and in the case of sepsis.

There is a wide range of nanoparticle applications made possible by the new technology. In one series of experiments on mice, the researchers achieved a dramatic improvement in the so-called active delivery of nanoagents to cells.

It involves nanoparticles equipped with a special molecule to recognize target cells. An example would be using the antibody against the CD4 receptor that identifies T cells. Drug delivery to these cells would be useful for treating autoimmune and other diseases. The induction of a cytoblockade in mice yielded an increase in nanoparticle circulation time from the usual 3-5 minutes to over an hour. Without the cytoblockade, the clearance was too rapid, and no binding of the target cell could be achieved, but after cytoblockade the agents showed exceptionally high targeting efficiency, which was on a par with that achieved in vitro. The experiment highlights the enormous potential of the new technology not only for enhancing the performance of nanosized agents, but for enabling those previously completely inefficient in vivo.

The team went on to demonstrate the applicability of their technology to cancer therapy, with the cytoblockade enabling up to 23 times more efficient magnetically guided delivery of nanoparticles to the tumor (fig. 1). This delivery technique utilizes a magnetic field to guide, focus, and retain magnetic agents within a tumor to reduce systemic toxicity. Such delivery is available for nanoparticles but not molecules. The study reports an effective therapy of melanoma using liposomes loaded with magnetite and the chemotherapy drug doxorubicin, which were completely ineffective without the use of antibodies to red blood cells. Improved magnetic delivery was shown for five types of tumors of different nature, including melanoma and breast cancer. 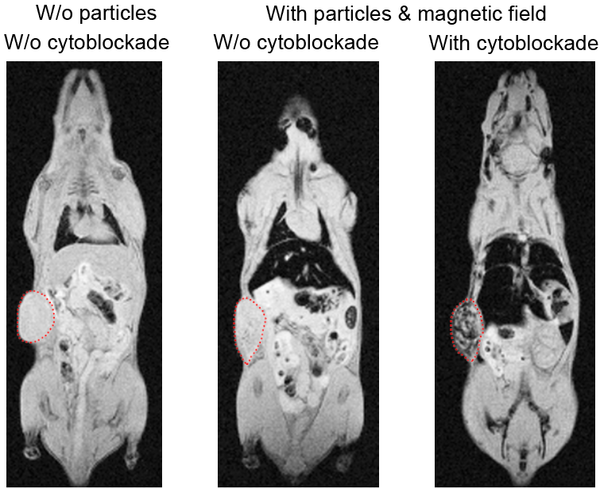 Figure 1. Comparison between magnetic nanoparticle delivery to the melanoma tumor in mice with the use of the cytoblockade technology (right) and without it (center); an untreated case is shown for reference on the left. The tumor is circled with a red dotted line, and the darker shading indicates a greater concentration of therapeutic nanoparticles in the tumor

“We observed an improved nanoagent delivery with each type of cancer that we ran experiments for. It is particularly important that the method worked on human tumor cells introduced into mice,” commented study co-author Ivan Zelepukin, a junior researcher at the Laboratory of molecular immunology IBCh RAS and MIPT.

Notably, the new technology enabled a therapeutic improvement for a commercially available liposomal agent approved for use on humans. This means that the cytoblockade does not only open up new therapeutic opportunities but also enhances the ones existing now.

The authors of the paper mention that the enhanced nanoparticle performance closely correlated with the prolongation of blood circulation time. That correlation could be established using a highly sensitive method of magnetic particle quantification developed by the team. It enables detecting the kinetics of particle elimination from the bloodstream in a noninvasive way — that is, without drawing blood.

“That method did more than allow us to make real-time measurements of particle content in the bloodstream. It enabled the whole study, because it would not have been possible to measure such an enormous number of nanoparticle kinetic profiles using any other existing method within a reasonable time,” said Petr Nikitin, a co-author of the study and the head of the Biophotonics Lab at the General Physics Institute of RAS. 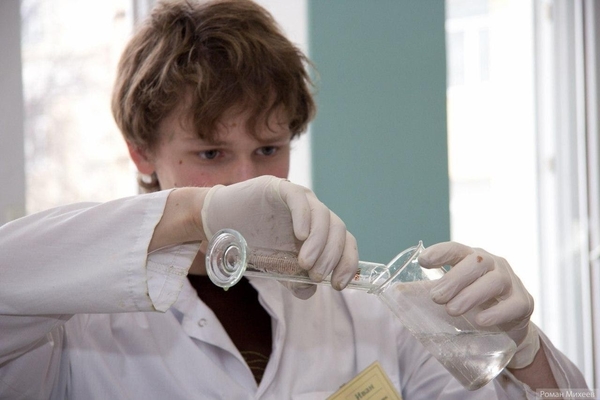 The newly developed technology is especially promising in terms of translation for clinical use, because the anti-D antibodies, which bind to RhD-positive red blood cells, have long been approved for the treatment of immune thrombocytopenia and the prevention of rhesus disease. Therefore, assessment of the new technology in humans can begin in the nearest future using the already approved medications.

“There is no doubt that the combined action of the nanomedicines with the existing anti-D or improved anti-RBC antibodies of the next generation should be examined in stringent clinical tests. However, we feel very optimistic about this technology and its applications to severe diseases that require targeted drug delivery, including cancer,” Maxim Nikitin added. “Now that this complex seven-year study has been published, we will make every effort to translate it into clinical practice. For this reason, we are seeking collaborators and active colleagues interested in joining the team.”

Since the cytoblockade technology is universal in terms of the compatible nanoagents and does not require their modification, it has the potential to become substantially more productive than PEGylation, which was developed in the ’70s and has since given rise to a multibillion industry of “prolonged circulation” drugs, with dozens of clinically approved medications.

The authors believe that the proposed technology may open doors for in vivo use of the most advanced nanoagents with the primary focus on functionality rather than stealth characteristics. Novel biomedical nanomaterials fabricated according to the most progressive ideas in materials science may be instantaneously introduced into life science research in vivo and then rapidly perfected for clinical use.