Laboratory works on development of novel fluorescent tags and methods of fluorescence labeling of biological objects. The main focus is on the fluorescent proteins of GFP family, and also on other methods of noninvasive visualization of structures and processes in live cells. These methods are widely used in biomedical research enabling deciphering the molecular mechanisms of various normal and pathological phenomena and facilitating preclinical drug screening.

Laboratory (Laboratory of Biophotonics in 2009-2020) was established in 2009 by branching out of the Laboratory of Molecular Technologies for Biology and Medicine headed by Sergey Lukyanov; our team is working with fluorescent proteins since 1999.

GFP and related fluorescent proteins are widely used as genetically encoded tags for visualization of proteins and cell populations in live systems. We use site-directed and random mutagenesis to create new variants of fluorescent proteins. This approach allows to generate proteins with usual spectral properties due to new chromophore structures or altered amino acid environment of the chromophore. In addition, we are working on improvement of fluorescent proteins characteristics such as brightness and photostability that are important for their practical applications.

We are working on new fluorescent protein-based sensors for various regulatory activities, which enable quantitative visualization of the target events in live cells. For example, we recently developed ratiometric sensor for nonsense-mediated mRNA decay (NMD) and far-red sensor for caspase-3.

Photoactivatable fluorescent proteins (PAFP) are used for tracking movements of proteins, organelles and cells in live systems, as well as for super-resolution fluorescence microscopy. Earlier, our team developed several PAFPs, such as KFP1, PS-CFP and Dendra, which were among the world's first members of this protein type. Currently, we continue to work on development of new PAFPs and PAFP-based techniques.

In 2009 we discovered oxidative photoconversion of green fluorescent proteins based on electron transfer from the chromophore to an external molecule of electron acceptor. We are studying mechanisms of this phenomenon and development of methods of its practical applications (for example, for enhancement of fluorescent protein photostability).

Phototoxic fluorescent proteins (the first such protein, KillerRed, was developed by us in 2006) produce reactive oxygen species (ROS) upon light illumination. We are developing this optoginetic technology, which makes it possible to induce oxidative stress in target cell compartments, inactivate proteins and kill specific cell populations using light.

2002—2006. A panel of photoactivated fluorescent proteins with different types of light-induced spectral transitions was introduced: nonflourescent-to-red (KFP1), blue-to-green (PS-CFP), and green-to-red (Dendra). These newly developed instruments KFP1, PS-CFP and Dendra were applied for precise photolabeling of cells, cell organelles, and proteins and subsequent tracking of the labeled object. The new tools were also used for monitoring the target protein degradation in an individual cell in real time using fluorescence confocal microscopy.

2005—2006. The first genetically encoded photosensitizer was created. This phototoxic red fluorescent protein named KillerRed can be used for precise light-induced destruction of proteins and cell killing.

2005—2008. First syntheses of chromophores of red fluorescent proteins (asFP595, Kaede, zFP538) and their structural analogs were performed. This work revealed various aspects of structure-properties relationship in this group of chromophores and allowed to propose promising amino-acid substitutions in fluorescent proteins to obtain variants with novel spectral properties. 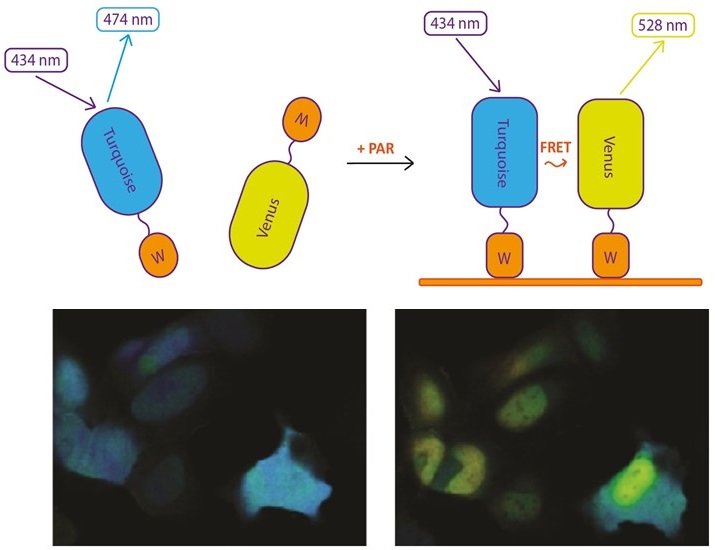 In collaboration with Laboratory of X-ray study 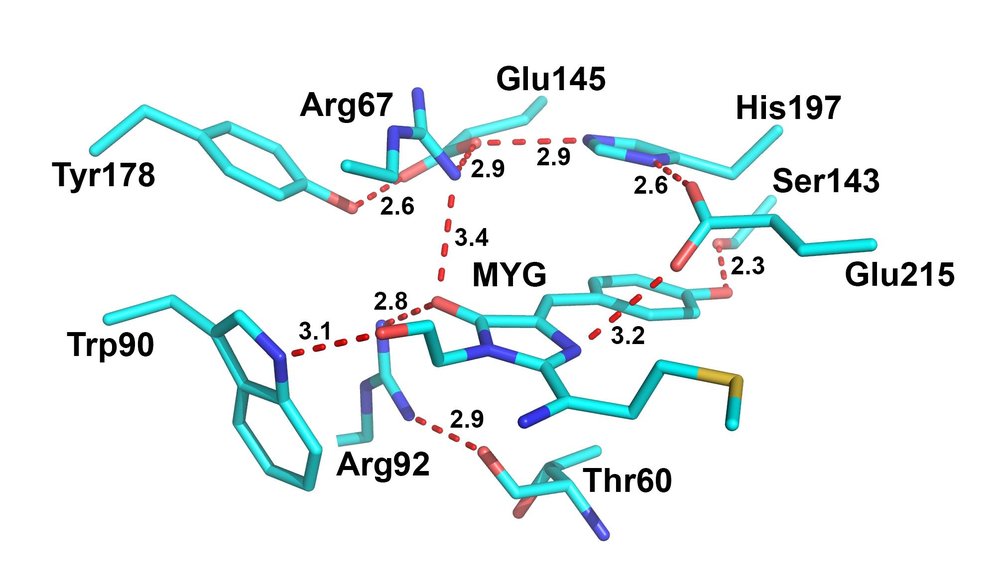 Red fluorescent protein FusionRed is highly effective low toxic monomeric biomarker and it is widely used for tagging the biological objects in live cells and tissues. Its crystal structure  has been determined at ultra high resolution 1.09 Å. The presence of two alternative pathways of post-translational protein modification with the formation of a mature chromophore (~ 60%) and an intact chromophore-forming triad (~ 40%) was revealed. The structurally based mutation of the Cys158 residue (which stabilizes the immature form due to the H-bond) by a bulky hydrophobic Leu residue led to 100% maturation of the chromophore.

In collaboration with Group of molecular tags for optical nanoscopy 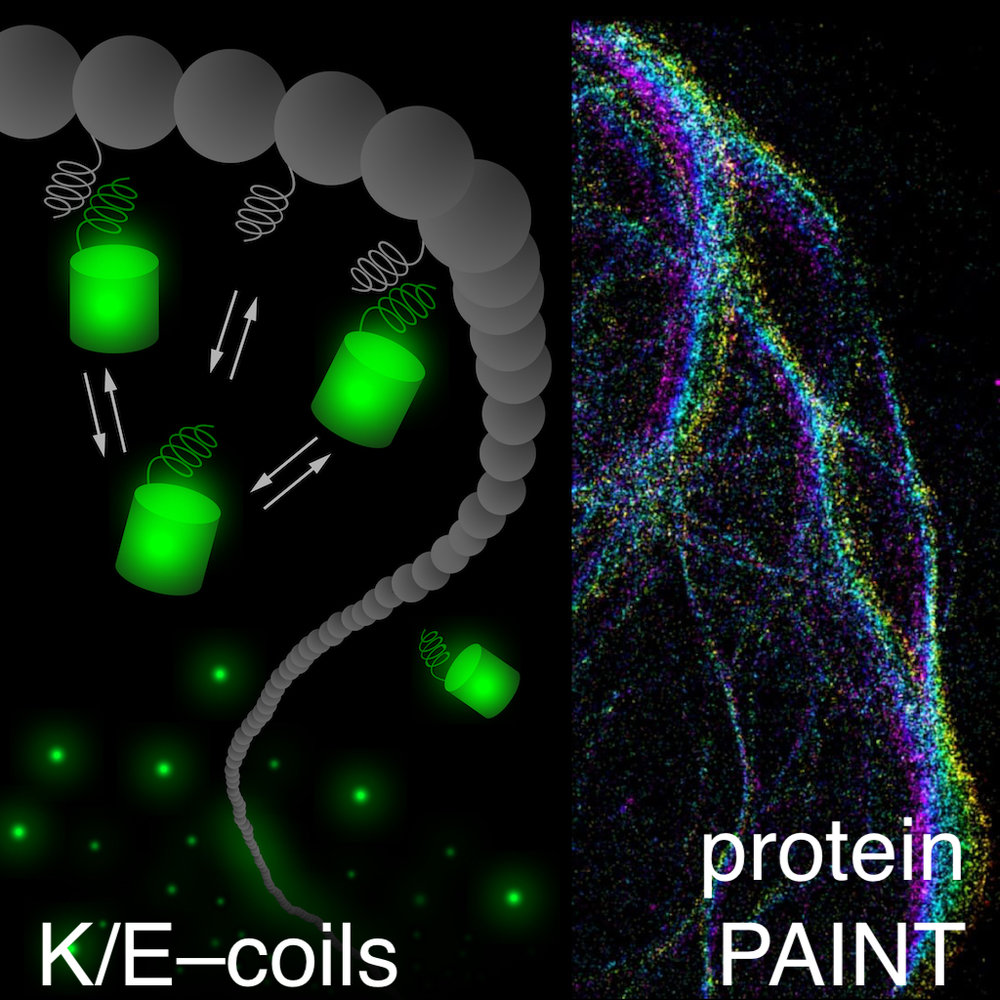 Heterodimerization of K/E-coils was applied for fluorescent labeling of proteins in living cells for the first time.

One of the specially selected α-helices (K or E) serves as a tag for the target protein, and the other is fused with a genetically encoded fluorescent protein. Due to the reversible interaction of K and E-helices, the target protein structure is highlighted, and the continuous exchange of fluorescent proteins in the complex increases the resistance to photobleaching by order of magnitude.

The small size of the labels (only 2-3 kDa) preserves the native dynamics of the studied proteins. Also, this method makes it possible to observe proteins almost immediately after their synthesis.

The most perspective was applying K/E-coils for Protein-PAINT – super-resolution localization microscopy based on reversibly binding labels. The continuous exchange of fluorescent proteins between the target cell structure and the cytoplasmic pool ensures a consistently high labeling density even during prolonged imaging. With the help of K/E-coils, for the first time, it was possible to implement the concept of Protein-PAINT nanoscopy using solely genetically encoded reporters.

In collaboration with Laboratory of immunosequencing methods

We developed new reversibly photoswitchable red fluorescent proteins based on FusionRed. These proteins, rsFusionRed1, 2 and 3, can be switched OFF and ON and by orange and green light, respectively. This photoswitching behavior allows to avoid illumination by phototoxic violet and blue light, which is commonly used for other photoswitchable proteins. Due to high brightness, high photostability, rapid photoswitching and low phototoxic excitation wavelengths rsFusionReds represent excellent tags for nanoscale imaging of living cells.

In collaboration with Laboratory of Chemistry of Metabolic Pathways,  Group of synthetic biology,  Group of chemistry of heterocyclic compounds 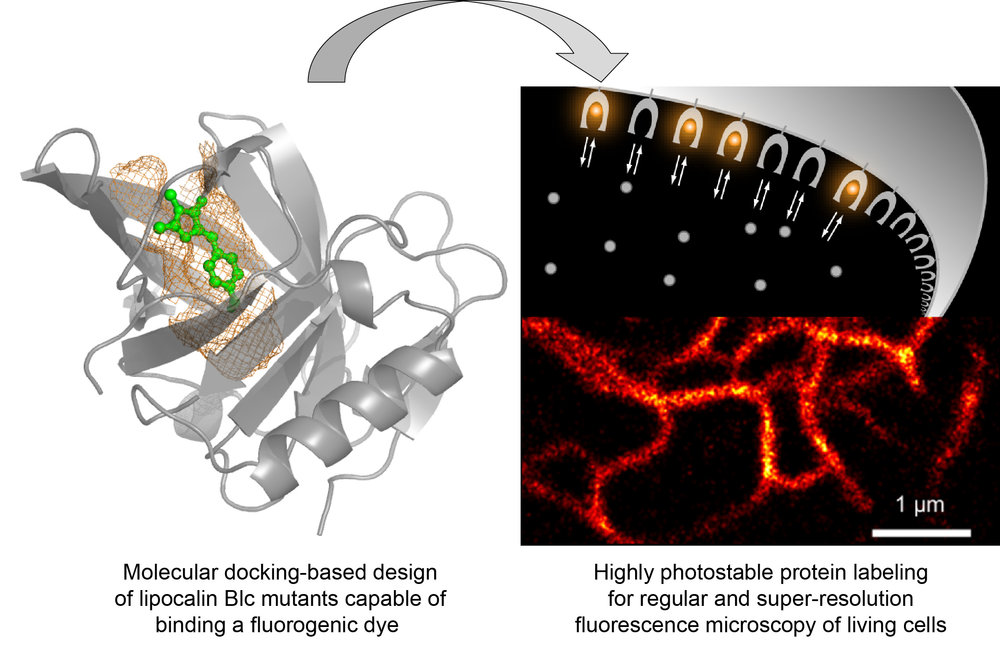 In collaboration with Group of synthetic biology

A so called “fitness landscape” was for the first time experimentally probed at the whole protein level using GFP as a model. A unique approach developed in this work enabled to correlate a function (fluorescence) with amino acid sequence of several tens of thousands of random mutants, revealing a number of negative and positive epistatic interactions between substitutions. Characterization of the GFP fitness landscape allows for computer prediction of properties of new mutants of fluorescent proteins. It also has important implications for several fields including molecular evolution and protein design.

Using calculations of the possible electron transfer pathways from excited GFP chromophore to external molecules and further experimental verification of these hypotheses, we constructed mutants with blocked electron transfer pathway and correspondingly increased photostability. This strategy may represent a new approach toward enhancing photostability of fluorescent proteins.

Figure. (A) Scheme of GFP fitness landscape derived from analysis of 51000 mutants. The GFP sequence arranged in a circle, each column representing one amino acid site. In the first circle, the colour intensity of the squares indicates the brightness of a single mutation at the corresponding site relative to the wild type, shown in the centre. Sites with positive and negative epistatic interactions between pairs of mutations are connected by green and black lines, respectively. In circles further away from the centre, representing genotypes with multiple mutations, the fraction of the column coloured green (black) represents the fraction of genotypes corresponding to high (low) fluorescence among all assayed genotypes with a mutation at that site. (B) Electron transfer in GFP. Upper panel – scheme of calculated pathway of electron transfer from the chromophore to external acceptor molecule via tyrosine-145 as an intermediate electron acceptor. Bottom panel – photobleaching curves of EGFP and its mutants in the presence of oxidant in the medium, showing a dramatic enhancement of photostability due to blocking the electron transfer pathway. 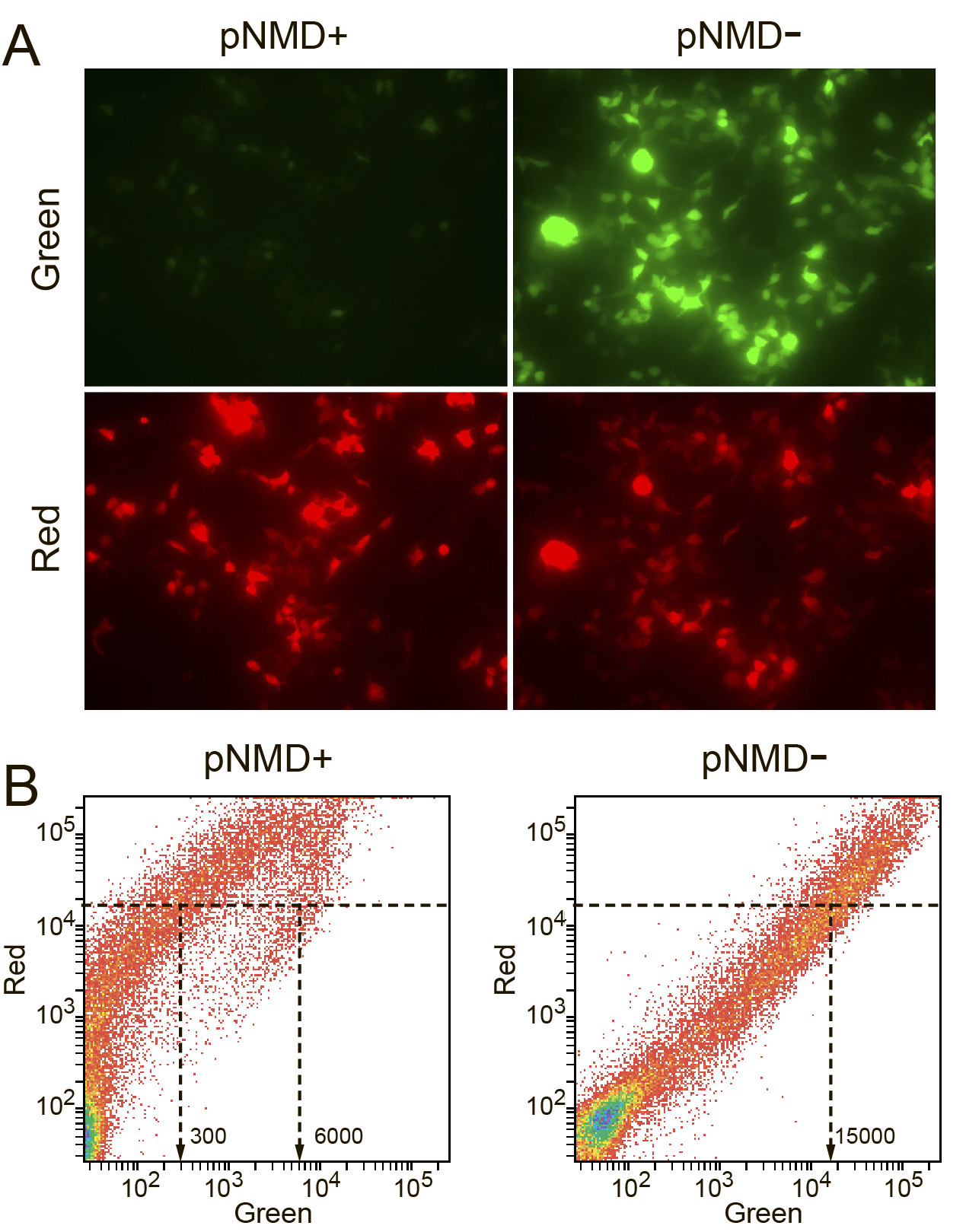 Nonsense-mediated mRNA decay (NMD) is an evolutionary conserved mechanism of recognition and degradation of transcripts with a premature stop-codon. Recent studies demonstrated that NMD plays an important role in global regulation of gene expression. We developed novel reporter of NMD activity based on fluorescent proteins. It enables quantitative analysis of NMD activity at the level of single live cells (this cannot be done by any other known method of NMD analysis). Using our NMD reporter, we revealed strong differences of NMD activity between mammalian cell lines. Also, a phenomenon of significant heterogeneity of NMD activity within some cell lines was observed for the first time. In particular, subpopulations of cells with high and low NMD activity were detected in HEK293, Jurkat, and HaCaT cells. Our method opens new possibilities to decipher mechanisms of NMD regulation as well as to study consequences of low NMD activity on gene expression patterns and cell physiology.