On 5-9 April 2017, Russian-German symposium entitled ‘Molecular Neurobiology Today and Tomorrow’ dedicated to the memory of Academician Eugene Grishin took place at the Institute of Bioorganic Chemistry of the Russian Academy of Sciences. More than 30 leading scientists from Russia and Germany, specialists in neurobiology and neurochemistry, gathered at the Institute to honor the memory of Eugene Grishin and discuss the most pressing scientific issues, to which the academician had devoted his scientific career.

The bilateral Russian-German symposium ‘Molecular Neurobiology Today and Tomorrow’ included two plenary and two section sessions, poster presentations, cultural, as well as memorial events, all dedicated to Eugene V. Grishin (1946-2016), Academician, Deputy Director of the Shemyakin-Ovchinnikov Institute of Bioorganic Chemistry of the Russian Academy of Sciences, and Head of the Department of Molecular Neurobiology, which he founded. The symposium was opened on April 6, and began with the unveiling of a memorial bas-relief depicting Eugene Grishin.

Bas-relief was unveiled in memory of Academician Eugene Grishin 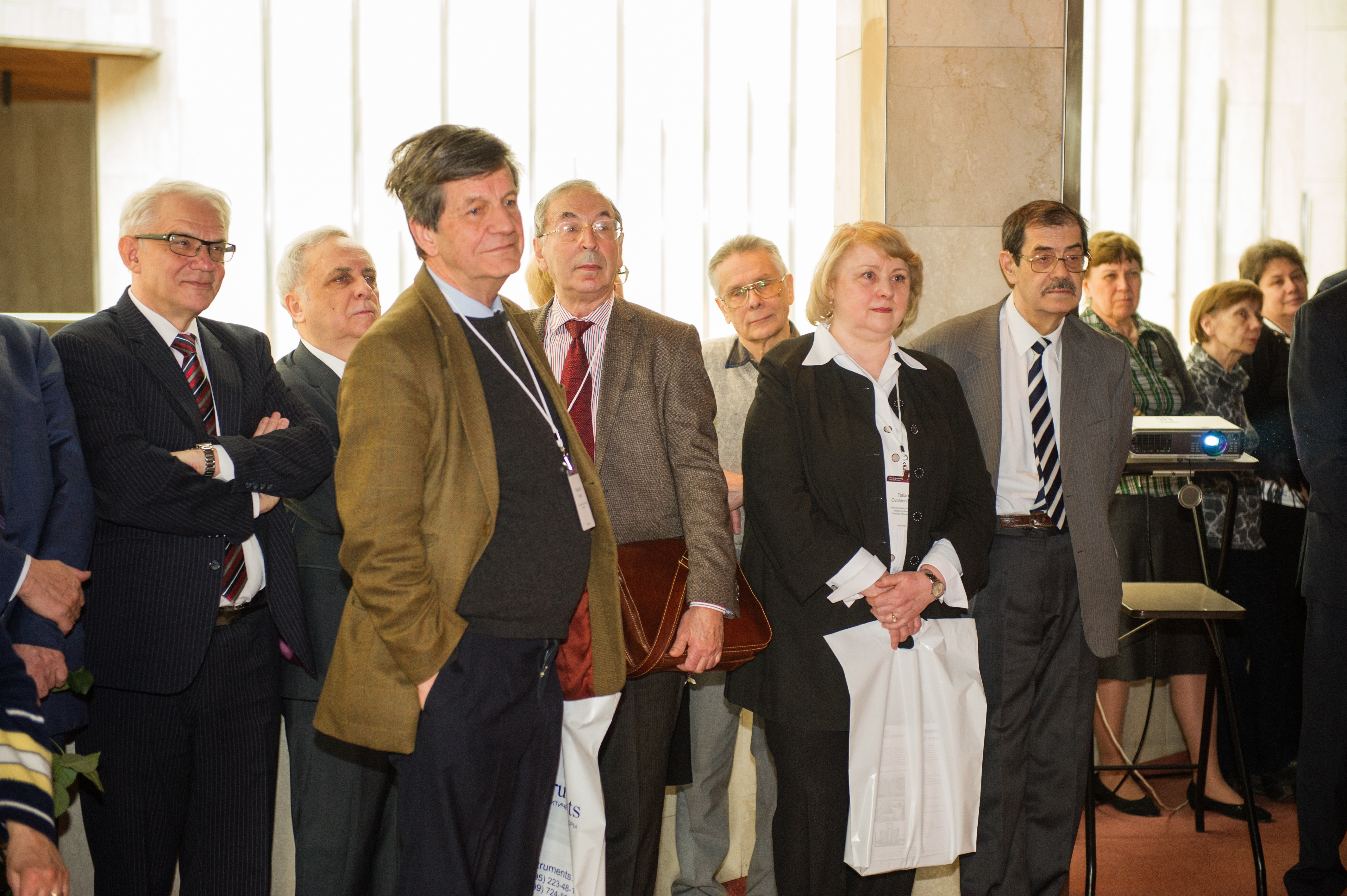 The field that Eugene Grishin was engaged in all his life began to develop at the Institute “after Academician and Director of the Institute of Bioorganic Chemistry Yuri A. Ovchinnikov met with Jean-Pierre Changeux who collaborated with scientists from Taiwan who in turn were the first to isolate alpha-bungarotoxin from the venom of the many-banded krait”, Eugene Grishin himself had narrated. “Using toxin as a tool, they were able to demonstrate what acetylcholine receptors are, and how they work. Yuri Ovchinnikov was amazed. Returning to the Institute, he gathered the staff, found himself a subject, who happened to be me, and put forth a proposal to begin working on these ground-breaking developments. Thus, the Institute began conducting studies on toxins from animal venom”.

Academician and Chairman of the Organising and Programme Committee of the symposium Vadim T. Ivanov took the floor and illustrated his narration with the best photos from the life of Eugene Grishin.

“A year ago, we lost Eugene Grishin, an outstanding scientist, organizer and colleague, and we are now doing an excellent job by holding a symposium in his memory and unveiling a bas-relief in his honor”, Vadim Ivanov noted. “Eugene was an attentive brother, a loving husband, a very active and pleasant colleague, and an outstanding scientist who truly loved what he did”.

Ferdinand Hucho, Professor of the Institute of Chemistry and Biochemistry of the Free University of Berlin, one of the organizers of the Russian-German symposia, also delivered a speech at the unveiling of the bas-relief.

“I met Eugene in 1980 in Makhachkala, where Yuri Ovchinnikov had organized a meeting of European scientists with Russian researchers”, narrated Professor Hucho. “Some of my colleagues from Germany encountered small problems on the border, but Eugene helped resolve them. At the same time, Eugene and I discovered a mutual interest in our research. I knew a lot about proteins, and he knew a lot about toxins, but we both knew almost nothing about neurochemistry, that is, ion channels, receptors or mediators. Then we started our longstanding relationship in science, of which I am very proud. Eugene was an excellent expert in neurochemistry. I am very glad that I am here today, and I am very saddened by the fact that Eugene is no longer with us. Eugene has left us with his remarkable colleagues, who continue his work and organize such important events as this symposium”. 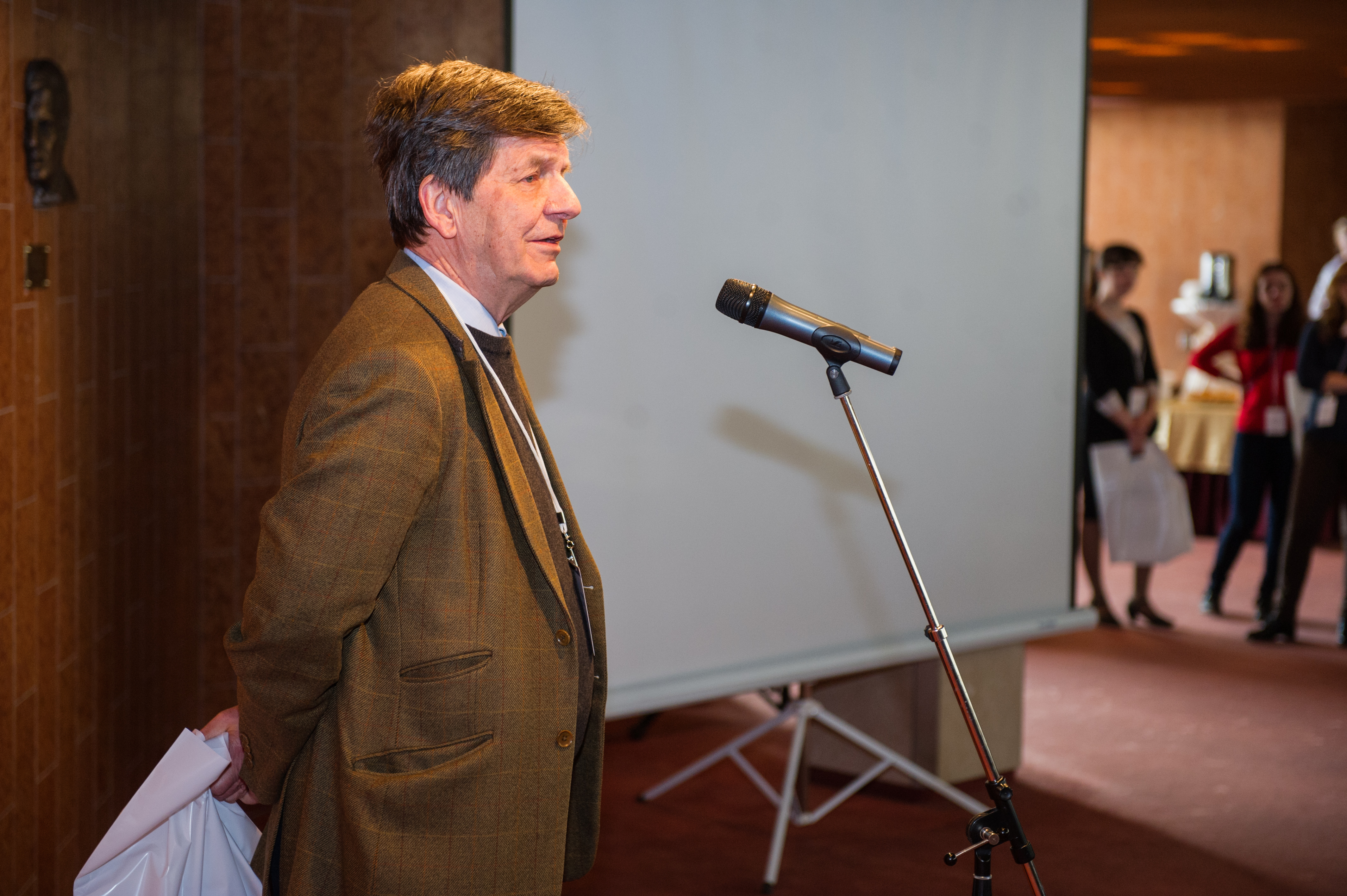 Topical issues in science were discussed at the symposium

Specific fundamental scientific problems, which were given special attention during the plenary and section sessions of the symposium, represent the most urgent challenges to the scientific community. These include the pathogenesis of neurodegenerative diseases, the development and plasticity of the central nervous system, genomics, transcriptomics and metabolomics of the brain, molecular bases of pain perception, structure and function of neuroreceptors and ion channels, mechanism of action of natural toxins and their use as molecular tools in neurobiology.

Director of the Paul Flechsig Institute of Brain Research, Medical Faculty of the Universität Leipzig Professor Thomas Arendt presented studies on the sporadic form of Alzheimer's disease. Head of the Laboratory of Neural and Neuroendocrine Regulations of the Institute of Developmental Biology of the Russian Academy of Sciences Academician Michael V. Ugrumov spoke about the plasticity of the brain and the non-dopaminergic neurons that synthesize dopamine when the dopaminergic neurons degrade, as well as the importance of this research in studying the mechanisms of the development of Parkinson's disease. Oleg A. Krishtal, Academician of the National Academy of Sciences of Ukraine, Corresponding Member of the Russian Academy of Sciences, Director of the Bogomoletz Institute of Physiology in Kiev, delivered a lecture on the functions of acid-sensing ion channels (ASICs) and their significance in the field of pain therapy. Professor Jan Tytgat, Head of the Laboratory of Toxicology and Pharmacology of the University of Leuven (KU Leuven) explained why peptides from the venom of cone snails with a low content of disulfides could be successfully used in pharmacology. 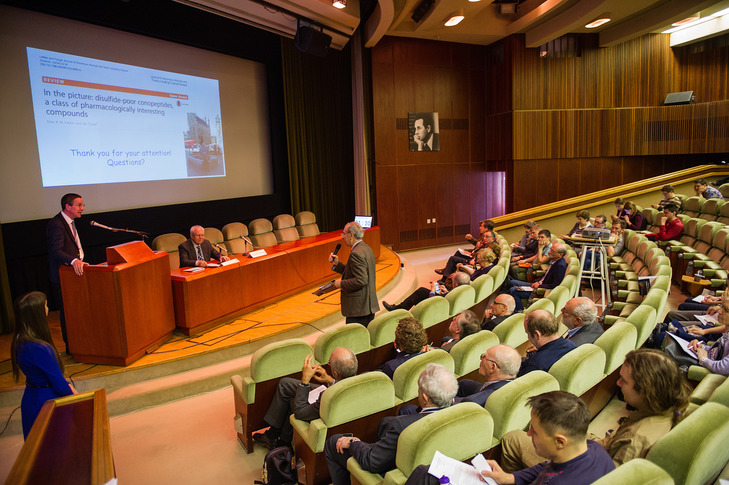 The next day, April 7, during a plenary session, Professor Yuri Ushkaryov of the Medway School of Pharmacy, University of Kent, delivered a speech on the role of specific cell adhesion proteins in the formation of synapses. Alexander G. Petrenko, Head of the Laboratory of Receptor Cell Biology at the Shemyakin-Ovchinnikov Institute of Bioorganic Chemistry, touched on the topic of alkali receptors in the nervous system and outside it, and Professor Roman G. Efremov, Head of the Laboratory of Biomolecular Modeling at the same Institute, spoke about various biomolecular interactions being actively studied today using computer technology. The plenary session was closed by a report from Kirill Volynski, Professor at the Institute of Neurology, University College London, on the experimental and model approaches to the study of the functioning of ion channels in presynaptic terminals in normal conditions and in pathology.

The symposium program also included a poster session, during which young scientists from the Shemyakin-Ovchinnikov Institute of Bioorganic Chemistry and other Russian research centers presented their research. 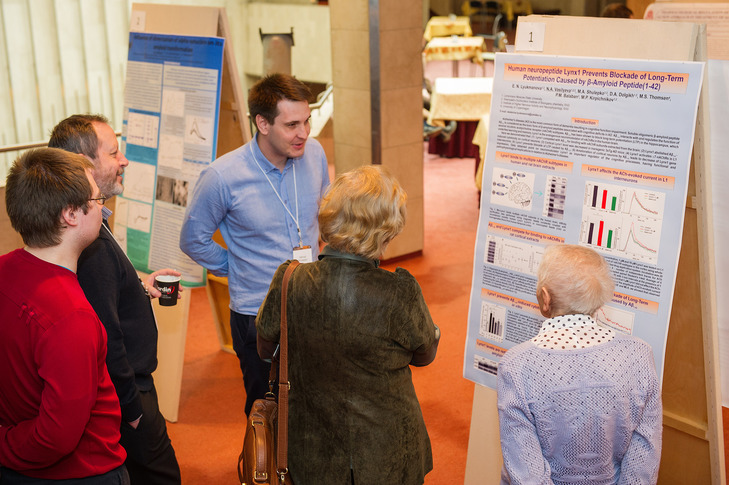 Memorial events in memory of Academician Eugene V. Grishin, one of the initiators of the symposia, continued on April 8, the day of the anniversary of his death. On this day, the symposium participants as well as researches from the Shemyakin-Ovchinnikov Institute of Bioorganic Chemistry visited the Troyekurovskoye cemetery to honor the memory of their colleague.

The bilateral Russian-German symposium Molecular Neurobiology Today and Tomorrow in memory of Eugene Grishin is a joint meeting of the Russian Academy of Sciences and the Berlin-Brandenburg Academy of Sciences and Humanities. “The symposium takes place every two years, alternately in Russia and Germany, and this meeting is the fourth. We twice went to Berlin, when the Russian delegation was headed by Eugene Grishin”, explains Alexander Vassilevski, Secretary of the Organising Committee. “I hope this tradition lives on. In any case, interest from both sides to organize and attend such meetings is high, because they act as platforms for initiating joint projects”. This year, the symposium has been attended by more than 100 people, including scientists from the leading scientific organizations of Germany (Bonn University, Heinrich Heine Düsseldorf University, Cologne University, Leipzig University and others) and Russia (Shemyakin-Ovchinnikov Institute of Bioorganic Chemistry, Lomonosov Moscow State University, Institute of Developmental Biology, Institute of Cell Biophysics, Sechenov Institute of Evolutionary Physiology and Biochemistry, Institute of Cytology and other institutions). Thus, the symposium brought together scientists from various regions of Russia. In addition, the event was attended by colleagues and students of Eugene Grishin working in other countries (Belgium, Great Britain, USA and Ukraine).