Bioluminescence – a widespread in the natural world process of “cold light” emission by living organisms, is based on an enzyme-dependent biochemical oxidation reaction in which energy is released in the form of light. Out of 40 presumed bioluminescent systems only for nine the structures of substrates - luciferins were elucidated, while a complete description of the luciferin biosynthesis pathway along with the corresponding enzymes was done only for two.

In recent years a great variety of bioluminescence-based screening methods have been designed due to their utility in dynamic monitoring of a variety of cellular functions. With each passing year the popularity of bioluminescence imaging techniques increases due to its high sensitivity and specificity in comparison with other known imaging technologies. However, each of these techniques has its own limitations and drawbacks imposed by the bioluminescence system used, which therefore brings importance to continuous investigation of new natural bioluminescence systems, that would allow to overcome these limitations.

Since 2014 Russian scientists, in collaboration with their colleagues from Japan, Brazil, Spain, USA and the UK have determined the structures and mechanisms of action of two new luciferins from fungal and Siberian earthworms’ bioluminescence systems. Today in an article published in the journal Proceedings of the National Academy of Sciences USA the team from the Shemyakin-Ovchinnikov Institute of Bioorganic Chemistry of the Russian Academy of Sciences together with colleagues from Japan and the US have presented the structure of the 10 th luciferin. In this paper the characterization of three key low-molecular- weight components of Odontosyllis bioluminescence system, along with the pathways of luciferin oxidation leading to light emission are described.

The so-called 'fireworms' Odontosyllis are tiny marine polychaetes (~20 mm) that produce bright blue- green bioluminescence. During breeding season, normally in the summer to autumn, their fire swarms appear near seashore for a short period of time at night. These fascinating glowing swarms were observed and described in his journals by Christopher Columbus during his voyage of 1492. The investigation of the bioluminescence system of Odontosyllis began in the middle of the 20th century, but despite multiple attempts, including one by the Nobel Prize laureate Osamu Shimomura (1928-2018), the biochemical basis of the Odontosyllis light-emitting process remained largely unknown. 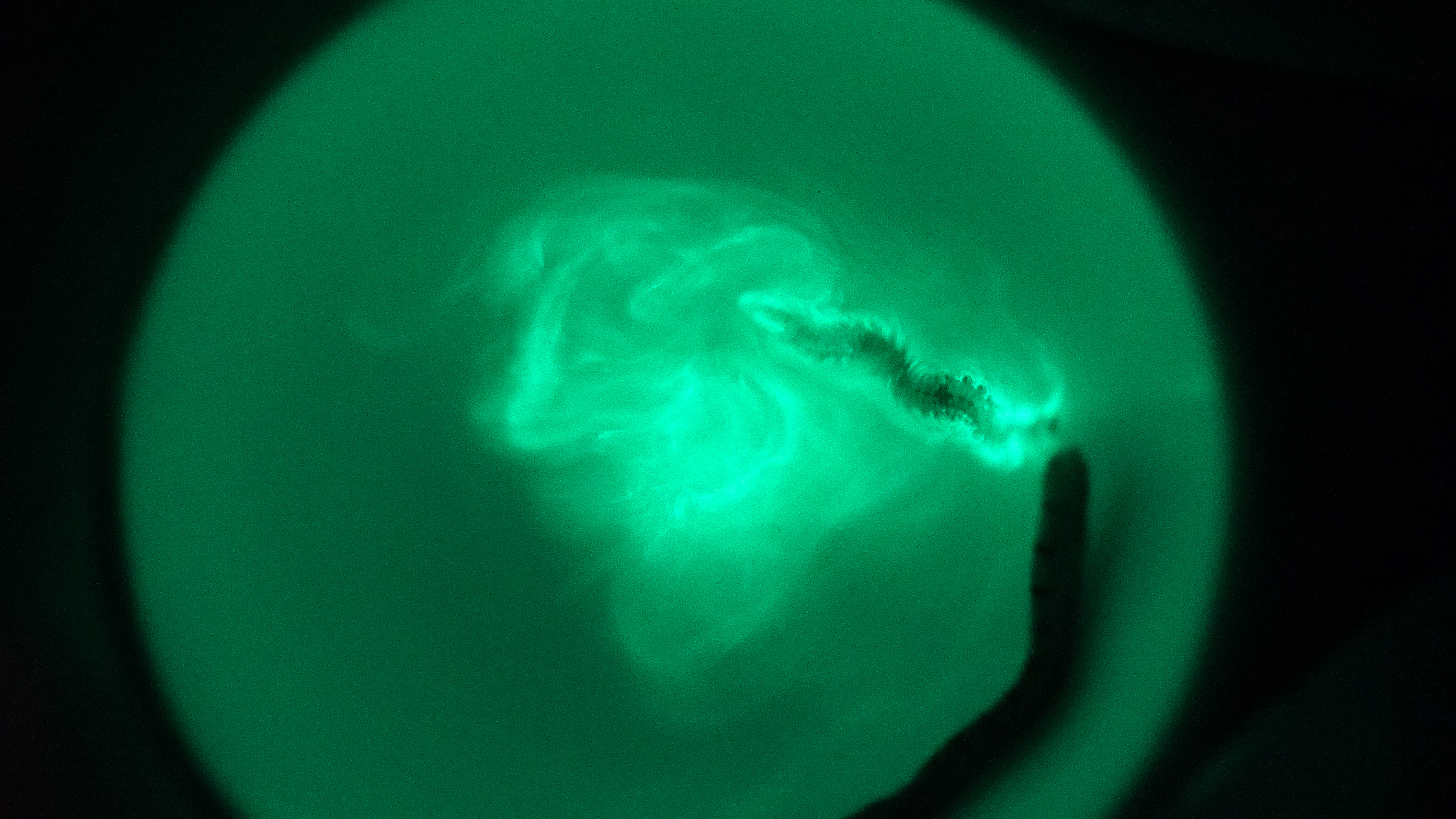 In 2018 the identification of Odontosyllis luciferase gene was accomplished by partial protein purification and RNA-seq analyses (Schultz, Kotlobay et al., 2018. BBRC) using a small amount of frozen samples. By contrast the characterization of the luciferin chemical structure required a much greater amount of worms’ biomass.

The first hurdle to overcome was Odontosyllis sample collection – a process restricted by the tiny size of the worms and the specifics of their life cycle, allowing us to obtain only a few grams (dry weight) of the specimens per year. However thanks to the efforts of the late Professor Shoji Inoue (1927-2015), who was dedicated to the study of the Japanese Odontosyllis undecimdonta bioluminescence, we’ve obtained 80 grams of the lyophilized Odontosyllis worms, that he has been collecting on his own for 17 years and has kept in the freezer for future research.

The susceptibility to decomposition and extreme sensitivity of the luciferin to UV light presented the next serious challenge to our investigations of the Odontosyllis bioluminescence system due to the difficulty of obtaining the pure substrate. A specifically designed purification procedure yielded minuscule amounts of unstable luciferin, which was subjected to a battery of test to determine its structure. NMR spectroscopy, mass-spectrometry, and X-Ray diffraction were employed to reveal a highly unusual tricyclic heterocycle luciferin substrate containing three sulfur atoms in different electronic states. The unique structure of Odontosyllis luciferin provides a key insight into a completely novel chemical basis of bioluminescence, as this new molecule does not share structural similarity with any other known luciferins.

Along with the luciferin two other crucial molecules were isolated from Odontosyllis biomass and identified: Odontosyllis oxyluciferin and the product of luciferin nonspecific oxidation, termed Green and Pink respectively, due to their colors. Together the structures of these low-molecular-weight components of Odontosyllis bioluminescent system have enabled us to propose chemical transformation pathways for the enzymatic and non-specific oxidation of luciferin. Odontosyllis oxyluciferin is the only green primary emitter described for any known bioluminescent marine organism.

This work is an important milestone in the framework of a large project, aimed at full characterization of a novel bioluminescent system, including the luciferase enzyme, luciferin substrate, key reaction products, the mechanism of light-emission, and biosynthetic pathways for luciferin and its analogs. The newly discovered molecules and the mechanisms presented in this work hold the potential to stimulate the development of new bioluminescence–based applications in the future.

Institute of Bioorganic Chemistry of the Russian Academy of Sciences, Moscow, Russia;